The original article on the Razor Sharp system appeared in the February 1977 issue of Popular Science.  Popular Science retains all rights to the article and has denied our request to reproduce it on the Internet.  So, under the fair use principle for copyrighted material, we can only quote from the article for teaching purposes.  Many thanks to Gary Alpaugh for preserving and scanning the article.

You can get a razor edge on all of your tools and knives by following these simple steps
By JOHN A. JURANITCH

* John Juranitch got interested in sharp edges as a barber in the Korean War. Later he began a full-time study of blade design and composition, abrasives, honing, steeling and other subjects related to blades and sharpening. Today, he runs a business called Razor Edge Systems in Ely, Minn.

"The real expert we have to please is the meat cutter," says Juranitch. "You find a man who has pulled a blade 10 hours a day for the last 20 years. He has no Ph.D., but he will tell you if a blade is sharp. All he has to do is bury it about six inches in cold beef and pull . . . Many times when we're working a blade, we will notice blood. But we have to hunt for the cut, because a sharp edge produces a painless cut."

Despite all the misunderstandings and misinformation that produce so many improper sharpening methods, Juranitch claims that getting a nearly perfect edge isn't difficult - if you understand the principles and follow a few simple rules. Read on to learn the sharpening secrets of a pro.

How to sharpen a knife: Keep your hone from moving by putting it on a soft piece of rubber or tacking small pieces of wood around it. Use a Razor Edge guide (photo above) to establish the proper angles for primary and secondary edges, or try this trick: Fold one 90-degree corner of a piece of paper in half. Fold in half again, and you have 22.5 degrees. Hold the blade at this angle or slightly less for your primary-edge face (right). Fold the paper again and you get 11 degrees. This is the angle you should use with the coarse hone for the secondary edge. Use whichever motion you prefer, back and forth or circular, being very careful to hold the angle constant. If you have trouble knowing when the burr forms (see diagram next page), check with a magnifying glass; once you see that curl you'll learn to feel it with your fingernail. When you go to the fine hone to form the primary edge, stroke the knife into the hone as if you were trying to slice it. Use only light pressure, as the edge is microscopic and pressure will distort it. Make alternate strokes on opposite sides of the blade. When the edge will shave hairs from your arm, it is usable. If you wish, concentrate on one section of blade at a time, leaving the curved tip until last.

Considering how long people have been using sharpened edges, you'd think we'd know a lot about them. But most people - even professionals in the field - don't. I've seen men who have been sharpening knives for half a century and still have little idea of what they're doing. We're found that the largest meatpacking companies in the world don't know what to tell new employees when it comes to sharpening.

Before I get down to the secrets of sharpening, let me tell you some of the things we've learned that aren't true. First, despite what you hear to the contrary, fine manufactured hones are far superior to the natural ones. That's not to say that natural hones are no good; they're just highly overrated.

And second, I'd like to puncture the biggest myth going - and I can hear the howls already. But we've learned the hard way. You're better off with a dry hone. I don't care what every sharpening book in the world says. You can save that oil and use it in your crankcase. The basic problem with using oil for sharpening is that as you sharpen, grit from the hone and steel particles from the blade become suspended in the oil and form slurry. The very fine edge you're putting on the blade actually runs into the particles of hone suspended in the oil. It's as though you were trying to sharpen your blade by running it through a sand pile.

I've had this point proved to me many times. A few years ago, we were called into Iowa Beef; the worlds largest. The meat cutters thought our edges were great, until one day management asked us why we didn't use oil. We explained situation, but they asked us to try anyway, just to see what would happen. So we used oil.

It wasn't long before the reports started coming back from the lines that the quality of the edges had dropped. So we cleaned all the oil off the hones and the reports suddenly got better. 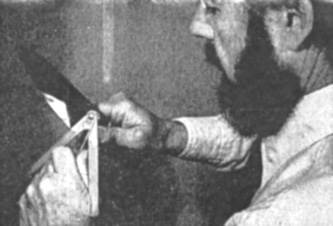 For true sharpness, try the Razor Edge steel. With the wings set to the proper angle and the knife blade parallel to the center support, the blade wipes the steel edge at precisely the right angle.

If your hone is saturated with oil, wash it thoroughly with hot water and soap before using it next time. Keep your fine hones clean by wiping with a rag; vigorously slap coarse hones on your hand, and all the loose particles will fall out.

One final tip: All new hones come with a smooth, dull finish on them and will not work properly until you wear through that surface.

As for sharpening itself, it doesn't make any difference what kind of blade you have. Sharp is sharp, whether you're cutting whiskers, leather, wood, or meat.

When you begin a sharpening job, remember the two critical steps. First, do a good job of tapering the edge back with the coarse hone. This produces blade relief, and is the most important part of sharpening (the diagrams show why). A blade with good relief will sharpen easily to a high quality edge. Second, set the primary cutting edges with your fine hone. Don't get too anxious, pay attention to your angles, and you'll always be able to get a knife-edge that will shave the hair on your arms without touching your skin. For further info, write Razor Edge Systems, Box 604, Ely, Minn.

Edge design starts with a decision on how much taper to build in, and is determined by what you plan to do with the edge. The rule is to taper it back just short of the point at which it will collapse when worked most severely. 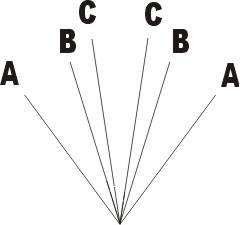 Thus for a chisel, A would be best. For a knife designed to do everything from cutting rope to opening 55-gallon drums, B is a good choice. But for a professional meat cutter and most of your kitchen, hunting, and pocket knives, taper back to C. 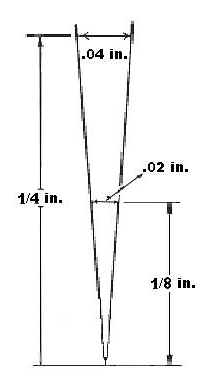 Keep taper angle in mind as you begin sharpening a blade. Chances are, a dull blade looks something like A. Held at the proper angle during sharpening, it will grind to shape B. When it reaches this point, a small burr will rise as shown. This is critical; it tells you that you have ground enough. You may not be able to see the burr, but you can feel it by running your finger over the edge at a 45-degree angle or by running a fingernail across the edge. Now turn the blade over and grind on the other side, making sure your burr comes up (C).

The most important secret of sharpening : To this point, the blade has been ground to form a secondary edge face. But for a really sharp edge, you must form the primary-edge faces that come together to form the actual cutting edge. The secondary faces were formed on a coarse hone, since a good bit of metal might have had to be removed. Now, for the primary edge, switch to a fine hone and increase the angle. This is called double edging and is the secret of a really fine edge

The editors of Popular Science were curious about what an edge looks like under high magnification. So John Juranitch sharpened a number of knives by different processes, then cut almost through the blades on a grinding wheel so that we could snap off one-inch-long sections and have them photographed under a scanning electron microscope. We took them to Structure Probe, Inc., of Metuchen, N.J., where the following pictures were made.

Anatomy of an edge 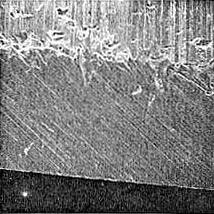 At 100X magnification, the secondary edge shaped with the coarse hone can be seen at top. The smoother surface below is the primary edge. 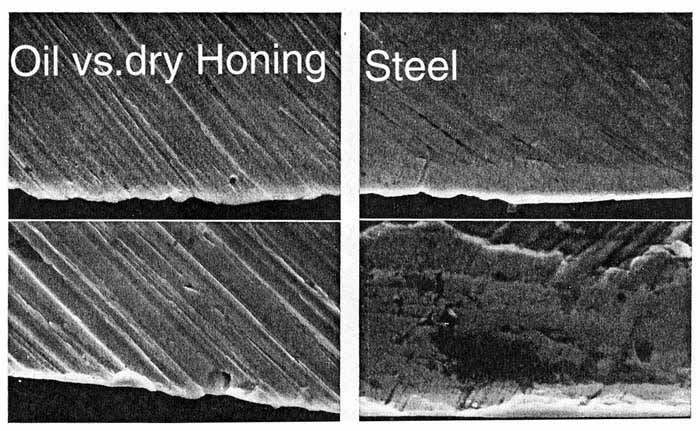 An edge made by a hone has some tooth pattern no matter how sharp. These edges are shown at 3000X magnification. The dry-honed edge (top) is somewhat rough. But the one honed in oil (bottom) has several large chips taken out of it? something like an arrowhead that has been chipped away to produce an edge. Juranitch suspects these chips were caused by particles of grit suspended in oil, claims this edge would not compare with a really sharp dry-honed edge.

The steeled edge has been smoothed out (top) into an even sharper cutting edge, as though someone had wiped the frosting on a cake with the side of a knife. Notice that there are no primary furrows (caused by the hone) left in the steeled area. Bottom photo shows a more heavily steeled edge. The metal has actually flowed back as though it were molten. This is an edge no hone will ever equal. But be careful not to over steel. In some microphotographs we've taken, you can see a thin hair of metal peeling away from such an over steeled edge. That ruins the edge and the blade has to be honed again.