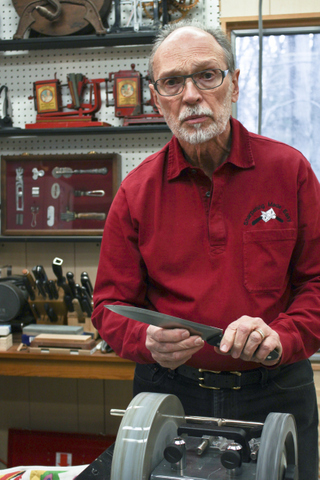 Hi, I am Steve Bottorff.  In the picture above, taken in my workshop, you can see some of my collection of antique knife sharpeners.
My professional career was in electronic test equipment, first as an engineer and later as a sales manager.
I learned knife sharpening from my grandfather when I was a Boy Scout.  Grandpa was a country doctor who had to sharpen his own scalpels.
He loved to hunt and fish and had a reputation for always having a sharp pocket knife.
As I began to plan for retirement I started looking at knife sharpening from an engineering approach.
I tested a variety knife sharpeners and wrote an article about knife sharpening that was published in Knife World magazine in July and August 1999.
About the same time I started a website which later became sharpeningmadeeasy.com.

In 2001 Knife World asked me to write a book on knife sharpening and in January 2002 Sharpening Made Easy was published.
Readers of SME began asking for additional information and hands on experience so in 2003 I started teaching.
Since then I have trained 30 or 40 students every year and many have become professional sharpeners.
Students have come from all 50 states, and international students have come from Ireland, Australia, Canada, Mexico and the Caribbean.

In addition to teaching and sharpening knives at farmers markets and culinary stores,
I am a dealer for Wusthof knives, F. Dick knives and sharpeners, Tormek wet grinders, Wolff Industries Twice-As-Sharp scissors sharpeners,
and Razor Sharp Edgemaking paper sharpening wheels. All knife sharpening students receive discounts on this equipment.
I have also worked as a knife sharpening consultant to the rubber, leather and produce industries.

I am married to Pat Moyer.  Pat is also a retired engineer who went into business.  We are both amateur musicians;
Pat plays piano and owns her aunt's Steinway grand.  I play flute, often bass flute.  We both take lessons at the Cleveland Music School Settlement.
We also share interests in nature and the outdoors; music, art, and theater;
and fine food and wine; and our daily activity and travel usually reflects those interests.
We live near Cleveland Ohio and value the many cultural treasures of our city.