A PRIMER ON KNIFE SHARPENING - Chapter 3

The mistakes commonly made in sharpening are uncontrolled edge angles, failure to establish a new edge, and leaving the edge too rough. The following methods address each of these mistakes.

The keys to success are:

1) Use an angle guide to control the edge angle,

2) Sharpen until you raise a burr, and

3) Hone or polish the edge smooth.

Some instructions refer to the sharpening motion as trying to slice a thin layer or a decal off the stone. This is bad advice, and here's why: most people won't hold a constant angle this way. Every different edge requires that you hold the blade at a different angle when slicing a thin layer. You instinctively raise the blade until you detect the edge working. This is almost a sixth sense, involving both feeling and hearing. The same thing happens when sharpening by hand. The duller the blade becomes the more you raise it more before you can sense the edge working against the stone. This creates larger edge angles as time goes on and the results gradually deteriorate. Skill and practice will overcome this problem, but the sure-fire way is to use a guide to maintain edge angle.

If you do not remove enough metal to create a new edge, you will leave some of the dull edge in place. The easiest way to determine that you have removed enough metal is to grind until you have raised a burr. Steel will naturally form a burr when one bevel is ground until it meets another. You can then remove the burr in the honing process and have a sharp edge every time.

A final honing and polishing will bring the edge to perfection.

For fast removal of the old edge, start with a coarse, fast cutting stone. Diamond stones are the fastest cutting manual stones, with Japanese waterstones second. The first step is where most of the work is, and you can benefit most from using a power sharpener.

Set the guide and take a light stroke with the stone. Check the angle against the old bevel. If the new scratch pattern is on the back edge of the old bevel, you are lowering the angle. If it is at the edge, the angle is being increased. When the scratch pattern is centered on the bevel you are duplicating the original angle. Keeping the original angle is a safe strategy until you gain more knowledge. 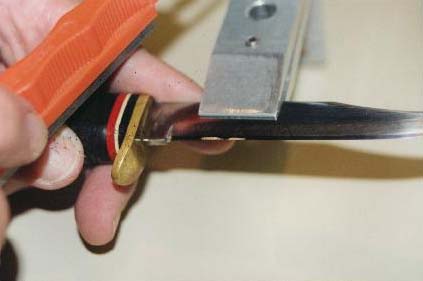 When the angle is set correctly, grind one side of the blade until you have removed the old edge. Grind until you have raised a burr. The burr will appear on the side opposite the one you are grinding. With experience you will learn how to stop with just a small burr in this step. If you are not sure, grind until you can feel the burr. Then turn the blade over and grind an equal amount off the second side. 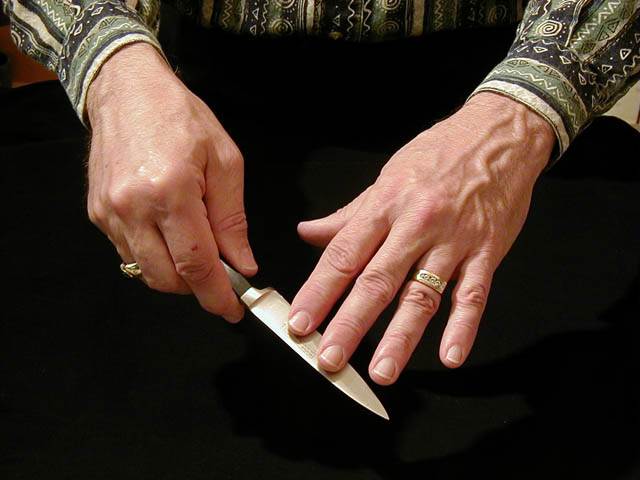 A burr is a natural occurrence in steel when one bevel is ground until it meets another. When I was learning I would show my work to my grandfather, and he would often show me that I had a burr. It seemed sharp, but the burr would eventually bend over and become dull. I tried to avoid ever raising a burr for years after that. As a result I never got anything quite sharp. Now I know that one of the secrets of sharpening is to raise a burr, then hone it away.

Ceramic knives and some very hard steel will not raise a burr. Here again experience will tell you when you have ground enough.

For the next step use a medium stone. Its purpose is not so much to remove material as to grind away the scratches made by the first stone. The medium stone should be about twice as fine as the first. If you started with a 180 grit stone, you can use 320 or 360 now. Use circular strokes until the old scratch pattern is gone. Then do an equal amount of grinding on the second side.

You might still be able to detect a small burr at this stage. Finish with a few light strokes sliding onto the edge to remove the burr. This is where slicing a decal off the stone is an accurate description. The blade should now be sharp with no burr. The edge now has 320 or 360 grit micro-serrations, which is good enough for many uses.

The micro-serrations are providing some of the apparent sharpness now but they will wear and bend. A steel or a touch-up stone will straighten them and bring back the sharpness. Continue to the next step if you want a longer lasting edge.

For the third step use a fine stone, 600 or 800 grit, and hone using only strokes going onto the edge. Alternate sides with every stroke.  This will help prevent forming a new burr.

Your edge should now shave. Test it as described above. If there is roughness, go back to the medium stone. If there is no roughness but the edge doesn't have enough bite, continue with the fine stone.

This variation will give you a longer lasting edge than the conventional method described above. The multi-bevel edge that results is similar to the convex edge found on Moran and BlackJack knives and the Trizor edge on Chef'sChoice knives. This method can be adapted to many types of sharpening equipment.

The first step is to grind an initial edge bevel about 5 degrees less than you want your final angle. This is sometimes referred to as pre-sharpening or thinning the blade. You will put a little more work into this step, but you will save some work later. Grind until the old edge is removed. As described above, the proof is that you have raised a burr.

Now change to a medium stone and set your guide for a few degrees greater angle. On a clamp-on type guide you increase the angle by moving the guide closer to the edge. On a rod type systems you can easily select another angle. Other systems have different ways to adjust the angle. See the section below for a method using the Lansky sharpener.

When you get to the fine stone increase the angle again another couple of degrees. Hone with strokes going onto the edge and alternate sides with every stroke. You are now grinding only a small area right at the edge, removing the burr and the scratches from the medium stone.

Since a finer stone cuts more slowly, it usually takes quite a bit of work to remove the previous step's scratches. By increasing the angle by a couple of degrees when you change stones, you focus this work on a smaller area near the edge and reduce the work needed

MULTI-BEVEL WITH A LANSKY SHARPENER 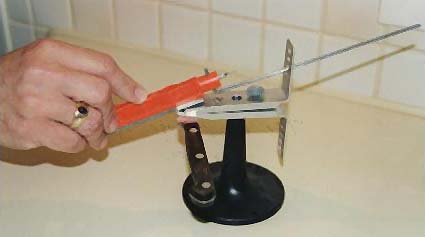 A multi-bevel edge can be accomplished with a Lansky Sharpener
by fixing the rod at different positions with each stone.

Here is an easy way to do a multi-bevel with the Lansky:

1. Push the rod into the coarse stone as far as it will go and still have the screw tighten against the flat. This decreases the angle by a degree or so. Do extra-coarse stones the same if used.

2. Mount the rod on the medium stones in the center of the flat per the instructions.

3. Push the rod into the fine stone only far enough to tighten the screw against the flat. This increases the angle by a degree or so.  Do the ultra-fine the same if you have one.

Now, when using these stones you will automatically create a three bevel edge.

Tip:  replacing the thumb screws with flat head screws will give you another 1/2 inch or so of useful stone.

You can further improve the edge by honing the edge on an ultra fine Japanese, Arkansas or ceramic stone, 1000 grit or better. Maintain the same angle as the final step above.

USING OILS AND WATER ON STONES

In North America we usually use oil on sharpening stones; in the rest of the world they use water. Tests by John Juranitch show that because oil carries the dross against the edge, better results are obtained with a dry stone. However, natural stones tend to clog without oil.  I prefer ceramic and diamond stones used dry, and my second choice is Japanese waterstones.

I'll leave this up to your personal preference, with the following guidance. With India and bonded Arkansas stones you can use oil or use them dry. Clean them with paint thinner. Use and clean Japanese waterstones only with water, but store them dry and soak them before using. Ceramic and diamond stones can be used dry or with water. Clean them with water and scouring powder when necessary. Washita and natural Arkansas stones can be used with oil, water or dry, and cleaned accordingly.

Company and product names are trademarks of their companies.