There are a whole lot of gadgets on the market that promise easy sharpening. I have tried a lot of them in my quest.  Theoretically with slot-type gadgets you just draw the knife through a slot a few times and it will be sharp. Many are worthless gimmicks, but some are worth considering.

The most primitive type of slot gadgets uses a pair of tungsten carbide tool inserts set at an angle.  A leading brand is Accusharp.  A variation uses a set of overlapping carbide wheels.  These literally scrape metal away from the edge, and leave a sharp, but somewhat ragged, edge.  This type shapes the initial bevel but provides no way to hone or steel the edge.  Also there is not control of blade profile, so you are likely to hollow out the blade, especially if the knife is held only by the handle.  Chatter is also a problem with some blades.  I bought one and it ended up in my junk box.  Benefit from my experience and save your money.

More refined slot gadgets use two sets of ceramic wheels or rods, one medium and one fine. This type hones well but is limited in its ability to sharpen. In the TwinSharp from J. A. Henckels these wheels are in the same slot.  In theory you might use both in one pass, but in practice I found that changing your hand position changes which set of wheels contacts the blade.  Knowing this, you can sharpen and hone separately.  The TwinSharp is good for touch-ups and I used it between regular sharpenings until I gave it to a friend.

The FireStone 1302 Knife Sharpener from McGowan Manufacturing is also a two stage setup, but with sets of four interleaved medium and fine wheels, each set in its own slot.  This makes it more convenient if the knife needs more sharpening than honing or vice versa.  The Firestone would be especially handy if you own their electric sharpener, reviewed in the electric section.  McGowan also makes a variety of other manual sharpeners marketed to fishermen and bow-and-arrow hunters.  These feature additional tools like a broadhead wrench, fishhook sharpener and line cutter.  Like golf spike tools and shotgun choke removers that are often featured on specialty knives, these tools are indispensable when you need one.  I picked up a FireStone SharpPocket because it was winner of a product design competition.  This is a single stage sharpener with only medium grit ceramic wheels.  Instructions say to go light on the last few strokes to polish the edge.  In my opinion the ceramic wheels are too coarse for a good edge, and they wobble.  It has joined my junk sharpener collection.

If you are going to benefit from a slot gadget, it must hone at an equal or greater angle than your sharpening. The Chef'sChoice Model 450 uses diamond stones at the same angles (22.5 and 25 degrees) as the final two stages of their electric sharpeners.  I keep one in a kitchen drawer for use between regular sharpenings on my Chef'sChoice Model 110.  The newer model 460 compliments their Model 120 and the latest 470 uses the same "steeling" technology as their latest electric sharpener, the Model 130.  Reviews on the electric page. 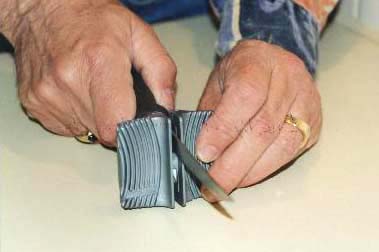 For about $3, the Normark sharpener is a best buy.

The Normark knife sharpener is an inexpensive slot gadget that can be found at a sporting goods store next to Normark's filet knives.  It has two sets of ceramic rods set at 20 degrees. The medium gray rods sharpen and the fine white rods hone.  I have used it to restore slightly dull blades to shaving sharpness.  It costs about $3, so it surely is the Best Buy. I buy them by the dozen and give them to my customers.  The Normark's 20 degrees is perfect for touching up a filet knife where the initial edge was 17 or 18 degrees.

The Shinkansen sharpener is a ceramic sharpener being sold for Global double bevel knives, not their single bevel Japanese style knives.  The test knife was a Global GSF-16 paring knife that was a couple of months old.  It was still barely shaving sharp - it would cut the hair if sliced just a little.

The Shinkansen has two ceramic spools that run in water to keep them clean.  Both appeared to be a medium grit.  I tried just the pink second or finishing stage first since the blade was still fairly sharp.  Five strokes with light pressure made the edge worse.  It would not shave now.  Ten strokes was no better.

Then I tried a full sharpening using both stages as instructed.  This did not improve the edge at all.  Close examination shows a frosty bevel line where the polished bevel had been before.  Another drawback of this sharpener is it will not sharpen within 3/4 in. of the bolster.

Conclusion: The Shinkansen may be able to help a really dull blade, but does not compare with Global's factory sharpening or any good sharpening that produces a shaving edge.  30 strokes in a Normark restored shaving sharpness.

There is one class act in every category, and the Meyerco Sharpen-It is it for slot gadgets.  Designed by Blackie Collins to be so simple that it could be used on horseback, the Sharpen-It features tungsten carbide wheels for the first stage and fine ceramic wheels for the second.  The ceramic is so hard and fine-grained that it is more like using a steel.  With this combination, the Sharpen-It performs well at both sharpening and honing.  http://www.meyercousa.com/

Unlike other slot devices, the Sharpen-It adds a third wheel to each set, giving two slots, and shapes them so that they sharpen one side of the blade at a time.  This setup allows you to vary the bevel angle somewhat.  Drawing the knife through at an angle decreases the bevel angle and gives a more razor-like edge. Since it is assembled with tamper-proof screws, I could not measure the bevel angles, but this information is less important because you won't have to use it with another sharpener to get complete results.

Also unlike others, the Sharpen-It can be used equally well left-handed.  It is so compact when closed that it can be carried in the watch pocket of your jeans.  The unit well built and sturdy, and features a tapered hone for serrated blades.  A less expensive model is available without the tapered hone.

Smith, the Arkansas stone company, has introduced a combo TC and ceramic sharpener with the similar performance for a lot less money.


What's your general opinion on the product? Good, bad, mediocre, why?


I would say mediocre.  The edge was not as sharp as I like, and the handle broke after a few uses.


Does it work well for the average knife user?


Yes, easy to use - until it breaks.  There is a little problem with using the middle (diamond) stage.  If you are not careful you can ruin the edge against the edge of the diamond areas.  They should have continued it out to the tips of the fingers.


Is it a good value?


Not really.  Sharpeners with the same capabilities can be purchased separately for about $15 - 20 per stage, so the total value, if it worked better, would be about $50.  For example, a Chef'sChoice 460 for $30 duplicates the second and third stages of the Furi, and an AccuSharp or similar TC sharpener for $10 has the function of the first stage, although I feel serious metal removal should be done by a professional sharpener.


Does it put the right kind of edge on a knife?


The theory is good, the execution is poor.


What kind of knives is it good or bad for?


Okay for slicing knives, bad in the long run for chef's knives.  Like all sharpeners where you hold the knife only by the handle it will eventually create a bow or reverse curve in the blade which will prevent full contact with the cutting board, and therefore chopping.  Reshaping the blade including bolster reduction is then needed - a job for a professional.

Company and product names are trademarks of their respective companies.